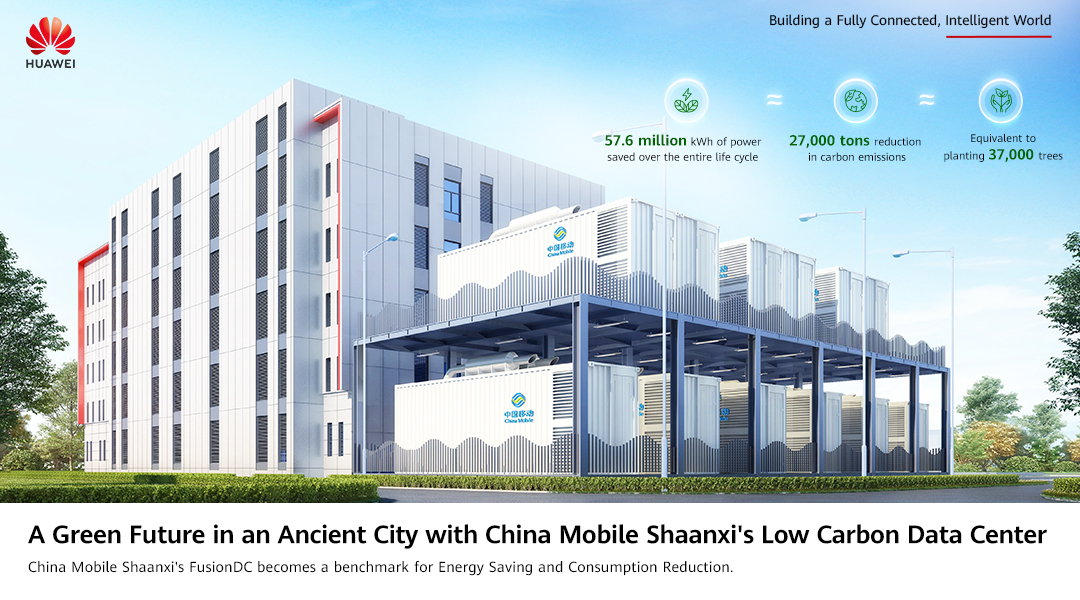 Xi’an, located in Northwest China, is one of the most historical cities in the world, serving as the capital for much of ancient China. Home to the famous Terracotta Army, the city receives hundred of millions of tourists every year.

Droves of tourists bring massive torrents of data. According to third-party database company Statista, 2021 saw a 79 Zettabyte (ZB) increase in data volume, the equivalent of approximately 79 billion Terabytes (TB). Such dramatic increases in data volumes put heavy strains on operators, and those in Xi’an are no exception to this trend.

In order to deal with an influx in mobile data, China Mobile set an ambitious goal to build its new and green Xixian Data Center (Shaanxi) in Xi’an. In collaboration with long-term partner Huawei, they decided on a solution that involved combining a prefabricated modular data center with indirect evaporative cooling technology to achieve a quick service rollout while prioritizing green and low-carbon results.

The data center was divided into 232 modules with the equipment all prefabricated and preinstalled in the factory. Then, after completing onsite preparation, LEGO-like construction was performed. This allowed engineers to complete the entire service rollout in just six months, with construction waste and dust slashed by 80%, and a material recovery rate exceeding 80%.

Huawei’s indirect evaporative cooling technology, however, capitalizes on Xi’an’s climate, drawing air from the surroundings to cool the facilities. Powered by Artificial Intelligence (AI) technology, the air compressor is only needed for two months of the year, with the facility relying on natural cooling for the other 10 months, reducing the cooling system’s energy consumption by more than 50%. As such, over a 10-year cycle, nearly 60 million kWh of electricity is saved, alongside 400,000 tonnes of water, which translates into slashing carbon emissions by 27,000 tonnes, the equivalent of planting 37,000 trees.

Huawei recently delivered a prefabricated modular data center for Safaricom as the telco begins to ramp up operations and launch a mobile network service in Ethiopia.

WE ARE PROUD TO BE ISO 9001 and CIDB CERTIFIED